The Latest Additions to the Arise “Family”

One of the things that has impressed us since the early days of Arise School is the fact that Frank and Salome always refer to the children and staff as the Arise “family”. This very much informs their approach and is reflected in the care and concern they show for the children both as individuals and as a group.

Whilst at the school recently, Ron met the three latest additions to the “family”. Firstly, two children who will shortly be starting at Arise School with the support of a new sponsor. We are always so pleased to hear from prospective sponsors. With their ongoing support, there are now 44 children in the Sponsorship Scheme. That means 44 children who only have the chance of an education because of their sponsor’s support. 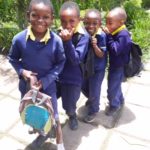 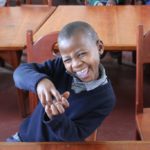 Ron visited the homes of both boys who will now be starting school shortly. Aged five and ten years respectively, their family circumstances are typical of so many of the children already being sponsored. Both live with their mothers, single parents without support, in very poor circumstances. Whilst we take for granted water and a proper toilet, all too frequently these are luxuries not available to these children and their families. Not least, in spite of their efforts to eke a living by collecting firewood or selling vegetables, there is often no money available for food.

There is certainly nothing spare to pay for school fees, uniform, shoes and stationary that the children need to have if they are to attend school. It is not unusual for parents to go to Arise School to see if there is any help they can be given. Whilst unable to help in every situation, following a home visit to assess the family situation and subject to a sponsor being found, it is possible for the child to be admitted to school. As these two newly sponsored boys start school, a whole new life and new opportunities will open up for them. But there are still so many other children waiting who are denied this chance.

If you would like to sponsor a child and give them the opportunity of an education we would be delighted to hear from you. Just £12 per month (approximately £150 per year) will cover the cost of their schooling, provide two uniforms each year and a daily meal.

Secondly, at the end of January, there was a third new addition to the Arise “family” – baby Hannah, Frank and Salome’s new daughter and a sister for their other two children, Holly and Harmony. We congratulate them and wish them much love and happiness together as a family.