From Cronton to Kilimanjaro!

Greetings from Tanzania! It is sometimes difficult to believe the contrast in our lives. Only last Friday we were welcomed back into Cronton C of E Primary School not far from where we live. Yesterday, less than a week later, we were being welcomed, once again, into the family of Arise Community School in the village of Wiri, Kilimanjaro. As always, it was such a warm, genuine and spontaneous welcome – the children running to greet us, grasping our hands with such happy smiles. It is always so good to return.

Back home, ACE has been privileged to have had excellent and ongoing support throughout 2015 from the children and staff at Cronton Primary School. They have been tremendous to work with and fundraised tirelessly for the charity in numerous different ways. Previous blogs have featured both the Tanzanian Marketplace they held in June and their Harvest Services to raise money for breakfasts for the children at Arise School.

Cronton School’s most recent initiative was thanks to one of the children’s parents, Mark Clayton. Having attended one of the Harvest Services, Mark contacted us with the idea of raising money to buy sports equipment for the school. With the support of Mrs. Thompson, the Headteacher, the school held a “dress down” day when the children were able to wear sports kit to school. They raised over £300! The children and their families also donated football shirts, shorts and socks that the children had grown out of.

When we went back into school last Friday, we were presented with so many sports items – footballs, cones, bibs, whistles, pumps, hula hoops and velcro covered bats and balls – that Mark had purchased from the money raised, plus a cheque for the remainder. There were also four large boxes full of donated sports kits. Our challenge was then packing everything to take out to Arise School within our luggage allowance! 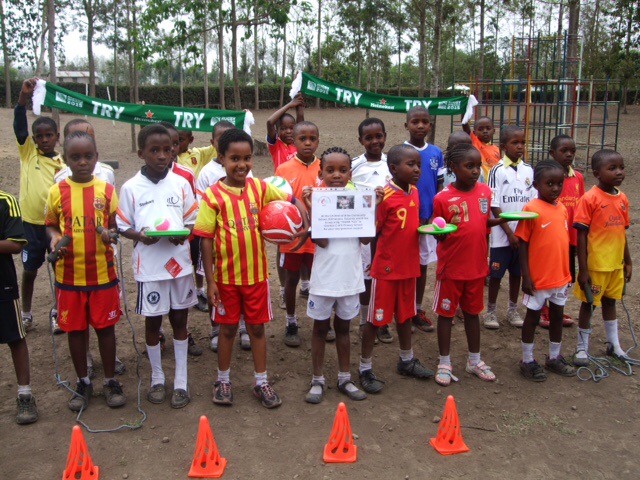 Mission accomplished! It was certainly an early Christmas for the Arise children. They were just delighted to see what we had brought out and could not wait to dress up for the photo shoot! What Mark and Cronton Primary School could not possibly have known was just how timely this initiative was. We learned on arrival that, from this coming January, all primary schools in Tanzania will be required to dedicate every Friday afternoon to sporting activity. Arise School now has such a head start. Thank you so much to everyone who contributed to make this possible. You are all “ACE”! 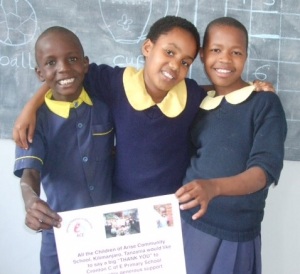 If you have a connection to a school who might be interested to fundraise for Arise Community School, we would be delighted to hear from you. Please e-mail Ron and Sue at: ACECharity@aol.com.