We were delighted to be invited back to a meeting of our local St. Helens Rotary Club recently to update their members on developments at Arise Community School. This followed a presentation that we did to the Club in August last year – our first presentation after we received charity status in July 2014.

Members were very interested in the work of the charity and gave us a very generous donation of £500 towards the completion of the third classroom. This contributed greatly towards the classroom being finished on schedule for the start of the new school year in January this year. A photo of us receiving the cheque appeared in The St. Helens Star, our local newspaper, and it was as a direct result of this publicity that we received an anonymous donation from a local retired couple to build a new school kitchen.

The return invitation provided the opportunity for us to update Rotary Club members on how their donation had been used – and, of course, the spinoff of the kitchen. We were also able to tell them about the donations and work by the local community on the fourth classroom and the success of the “buy a breakfast” appeal last Christmas which is making such a difference to the children’s health. Not least, we told them about the contribution made to both the school and the local community by our three volunteers as well as the ongoing role played by the Saturday Kisimani Kids’ Club. 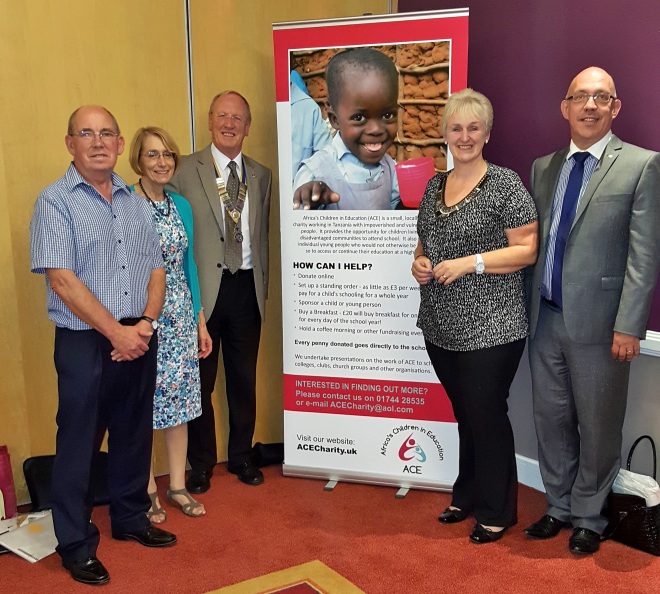 We were overwhelmed to receive a further donation of £500 which will go towards work on the fourth classroom. Again, although we still have more to raise, we very much hope that it will be possible to complete the classroom for January 2016. Steve Lawson, this year’s President of St. Helens Rotary Club, said:

“To find two local people prepared to give so much time and personal support to the future of a school development in one of the poorest areas of the world is surely a cause worthy of anyone’s support.”

We would like to say a huge “Thank you” to Steve and all the member of the St. Helens Club for their tremendous and invaluable, ongoing support. We know that you all work extremely hard to raise money for local charities and that there are so many worthy causes from which to choose. Your support is not only helping ACE to make a very real difference in the lives of the children but, also, enabling us to leave a lasting legacy for the community.