“Giving Children Back Some Of Their Childhood”

In previous years, medical students from the U.K. have visited Arise School whilst undertaking their electives in the local town of Moshi. Once again this year, Pauline Brown, Volunteer Coordinator with Kilimanjaro Community Support Project (KiCS), has taken out to Tanzania a group of 10 medical students. They recently visited the school and helped out at the Kisimani Kids’ Club which is held every Saturday afternoon at the school. Any child in the local community, whether or not they are a pupil at Arise, is welcome to go and enjoy themselves.

Anjali Kamath, one of the visiting students, writes:

“The journey to the school involved many different modes of transport and it took around two hours to reach there. The scenery on the way included a surprising number of vast sunflower fields. When we finally reached, the temperature was considerably cooler as we were at a much higher altitude.

After having a lengthy conversation with Frank about how far the school has come since building started in 2012, it was time to meet the children who come to the school’s playground on a Saturday afternoon for the Kids’ Club. It was interesting to find out that playing is not an integral part of a Tanzanian child’s life. They often have to walk a four hour round trip to school and back, then go home to work immediately afterwards. The Kids’ Club is a way of giving them some of their childhood back. It’s extremely well received by everyone with around with around 120 children turning up! 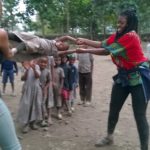 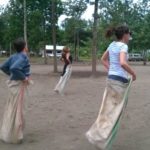 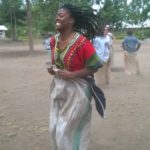 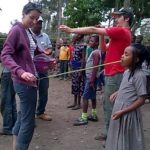 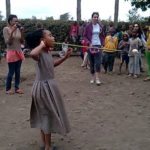 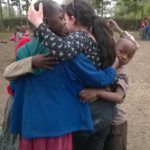 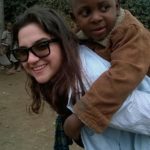 We played many games with the kids and it was a real change to see very friendly behaviour with no exclusion of peers. I was particularly impressed to see so many girls enjoying a football game, giving the boys a run for their money may I add! There just seemed to be no discrimination on any basis as everyone was there to have a good time. The kids are also extremely physically fit. I tried to push their seated merry-go-round with around 8 children sitting on it for about 40 seconds and was still catching my breath for a good 10 minutes afterwards! When Jenny, a young girl I met who was less than half my size and only 9 years old, pushed more children round for longer and way faster than I did and was completely fine afterwards, I was pretty embarrassed!”

Everyone has a lollipop