For anyone, the day that they graduate from university is a very special one. It is even more special when you dream of an education but your circumstances are such that you do not know how you will ever be able to achieve that dream. We have written before about Annastasia whom we have supported in education since 2010. At that stage, she still needed to finish secondary school and even sixth form was a dream.

After three years of hard study at Dar es Salaam University, Tanzania, three weeks ago we were delighted to be able to be present and to celebrate with Annastasia when she was awarded her degree in Sociology. As she joined her fellow students, it was a dream come true.

In the evening, we shared a meal with her, two of her childhood friends and three fellow graduands – all, very justifiably, equally proud of their achievements. Most importantly, the main meal was followed by a cake. As in many countries, the cake is used for cultural and religious ceremonies as a symbol of celebration, including birthdays, weddings, religious festivals and other special occasions. In Tanzania, cake is still very much a treat and is regarded as something special. 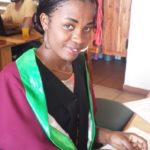 Following the Tanzanian custom, the cake is cut into small pieces which are then placed on cocktail sticks. Starting with those who have been most significant in her life, Annastasia offered a piece of cake to each person there. They took a bite of the cake from the stick and, in turn, offered the rest of the piece back to her. This is repeated until all members of the party have shared the cake. It is a simple ceremony that symbolises the sharing of life, health and happiness together. On our part, it was a privilege to be there for Annastasia’s graduation and to have been part of her life since we met her on our very first trip to Tanzania in 2008.

Good luck, Annastasia, as you embark on the next stage of your journey through life.