When Arise School closed at the end of December 2014 there were 88 children on the register. Since it reopened in January for the start of the new school year, the number of registered pupils has risen to 102! It seems hard to believe that it is only two years since the school first opened its doors with 11 pupils. The school’s reputation is certainly spreading!

Following the success of the “Buy a Breakfast” Christmas Campaign, we reported in a recent blog that, since term started, it has been possible to serve breakfast to all the children at the start of the school day. Not only are the children arriving in school early to make sure that they get breakfast, but their families have been coming into school to express their gratitude that their children are being fed. 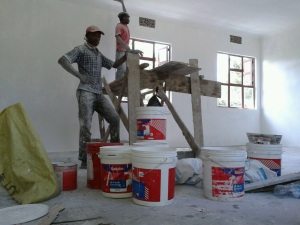 The third classroom has now also been completed and is in use. As with the other two classrooms, the building work, plastering, painting and all associated tasks were undertaken by local workmen. Desks and chairs were also made locally – all part of the charity’s philosophy to create jobs in the local community

The 102 children, aged 3 – 8 years, are divided into five classes so there is some doubling up across the three classrooms. Some children are being taught in an unfinished area which will eventually become the staff room. Fortunately, as an economy of scale, the roof was put on the staff room at the same time as the roof of the third classroom. At least that means that the children will be dry when the rains come in March. Whilst we hope that the outstanding building work will be completed during 2015, it is currently still on our “wish list” until we can raise the money.

To complete the building work on the staff room area, staff toilets and a medical room will cost £2,000. We would very much welcome any donations towards this.

We were delighted to learn that this term the school’s four teachers have been joined for three months by three students from a nearby teacher training college. Last year, two students from the college were on placement at the school, one of whom was subsequently appointed as a teacher. The students are an invaluable, additional resource for the school and the school’s reputation is spreading as a good learning environment.

We recently received the children’s end of year test results and some general comments from the teachers that there is a lot of good performance in the school. In particular, they note that there have been some good improvements in reading and writing. The older children are now communicating and reading well in English and able to help the younger ones with their learning. This is a significant achievement given that English, the official language in Tanzania is the children’s third language after their tribal language and Swahili, the national language.

Finally, we have been asked by the school to thank all of you – our supporters – on behalf of the parents and community. They are very happy about the school and the teaching provided. Thank you from us, too, for making this possible. Please help us to continue this work:
A standing order of £12 per month will pay for the costs of child’s schooling for one year, including tuition, two school uniforms and daily porridge

A one-off donation of £100 will pay for a Teacher’s salary for one month.